Seeing advertising gone good affirms my decision to get into this business. Yes, it’s money-hungry and sometimes just full of gimmicks. And then something like this comes along. When a company or brand doesn’t worry about the ROI for themselves, but rather just about the consumer base as a whole, it’s very reassuring. And inspiring. Because in the end, we’re all in this crazy world together.

Here, UTEC (a university in Peru) decided to put a recruitment billboard up. And to show the capabilities of learnings from this school, the billboard collected water from the air and turned it into drinking water for the whole community.

Seeing as I’m in the ad industry (to some respect), I’ve always enjoyed skimming Ad Freak and I Believe in Advertising every morning. It’s really fascinating to see what other countries can get away with as well as grab some creative ideas from the site for your own projects. Here are 2 I really, really loved this week:

To promote learning languages, they set up this billboard in a movie theatre. It said, in German, “Get a free cup of coffee at the concession stand.” Those who read German made their way to concessions. Once in the theatre and the movie began, with the translation of the sign outside and the message “You just missed a free coffee. It’s worth it to know foreign languages.” 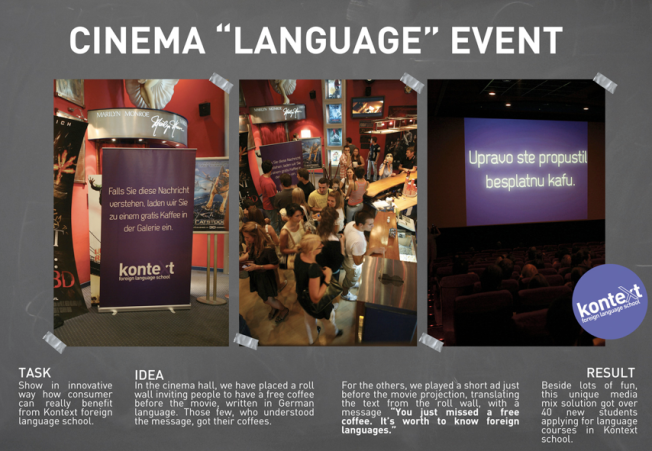 When we were abroad, Amber and I stumbled into a pub upon getting off the bus in Galway. We then met a table of adorable lads who were there watching the rugby game. But not any rugby game, the All Blacks team from New Zealand. I still don’t understand rugby, but every time I think of rugby I think of this team. And this promo that they made for the upcoming season is crazy good.

Growing up in a billboard ridden land, I’m used to reading billboards while driving along. And I was shocked to find some children actually live a childhood where they don’t know the lotto jackpot for the week or where Molly Brown’s fire stand will be so you can buy fireworks outside of your county as someone deemed them illegal.

When I came across A Love Letter For You, I loved it from the start. As someone who never drives, I’m constantly staring out the window when my nose isn’t in a book. Chicago doesn’t offer many reading options in the big city except for store fronts, their sales and other buses. Another reason why I love this project: it’s heavily based in community, which is a matter I’m personally invested in.

Here’s my favorite. And naturally, it got me thinking what I would submit. And also vaguely reminded me of that pathway on I-55 heading into the STL city (right around Afton I believe) that people used to rearrange cups in the fence to spell things out. Not nearly as advanced as this, but still effective.