Every year, the Junior Board for Cinema|Chicago and the Chicago International Film Festival puts on a spring fundraiser. The night raises funds for the outreach education program, which gives Chicago Public School students the chance to see an independent/international film and meet with cast from the film. Last year we did the Film Noir event and this year, we’re raising the stakes.

We’re holding “The Reely Teeny Weeny Film Festival Spectacular” and asking anyone in the Chicago area to submit a 60-second film that either recreates a favorite scene or sums up the whole movie in the 60 seconds. Our Junior Board will select 15 films to screen and show at the event, allowing partygoers to vote on the winning entry. The event will take place atop the Dana Hotel at Vertigo Sky Lounge (so fingers crossed for unseasonably warm April weather).

The winning entry will be shown during the Junior Board Night at the 48th Chicago International Film Festival this October. Pique your interest? Know of someone who would be perfect for the event? Head here for more information.

I can’t remember the last time I was this excited for April. 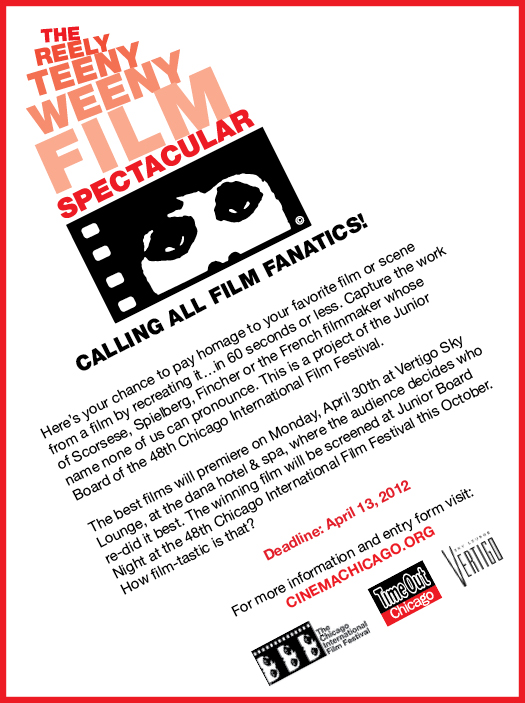 The Chicago skyline is going to have some bright, colorful lights to compete with at the end of the week. From February 10-20, Millennium Park (and Cloud Gate–or The Bean) will become Luminous Field. The work, by artist duo Luftwerk will take pedestrians on a sound and light spectacular, making the exhibit truly interactive.

I for one am pretty excited to see this from our office viewpoint, then go down and just dance crazily in the lights, among the lights and under the lights.