It’s no secret. I am an addict. Like the first time I hear it’s available, I just start twitching for it. It replaces my sleep, social life and eating habits. It’s volunteering.

I’m not sure at what point in my life volunteering became such a big deal, but alas, it did. And since I’ve moved to Chicago, I’ve done some pretty cool things, from tutoring, to reading programs, to newspaper reading with Seniors, to the Marathon, to Art on Track, to the Half-Marathon, Urbanathlon, to the Film Festival. I just can’t turn down a chance to get out of my comfort zone and do something I normally would never do.

Not to mention, I have met some fantastic people. Insanely fantastic people. They’ve become a new circle of friends in my life and frankly, I couldn’t imagine a life where they didn’t exist. And reaped some pretty stellar benefits.

Case in point: this past weekend, I used vouchers for a Chicago International Film Festival show, Nice Guy Johnny, directed by Edward Burns. Last year, I dragged Maggie to a terrible film (Mammoth), so I knew I really needed to make it up to her.

I noticed they also were having an after party with Edward Burns right after the film showing. So I finagled to get us on the VIP list. It only worked since the staff regards me as a SuperStar Volunteer, a title I’m happy to wear.

Needless to say, after the fantastic film (it’s available on iTunes, so hop to it!)  and Q&A, Mags and I headed to Sub51 for the all-inclusive party. We sipped some fantastic Grey Goose cocktails and caved and bought food (it was a smart move for sure). We sat across from Mr. Burns all night and finally, I had the courage to go up to him and talk, while bringing Maggie with me of course!

Hanna: Hello Edward Burns, my name’s Hanna and I simply loved you in Saving Private Ryan
Edward Burns: Thank God you did not say The Holiday or 27 Dresses.
Hanna: Hahahahaha. I seriously loved Private Ryan! Oh, since you’re leaving, real quick, a picture?
EB: Of course!

EB: Oh sorry ladies.
Hanna: What did you do to our technology pieces?!
Maggie: Get Mary to take it!
Hanna: Edward, third time’s the charm! And let’s get Mr. Mad Men in this photo!
EB: Yea, Don Draper, get over here! 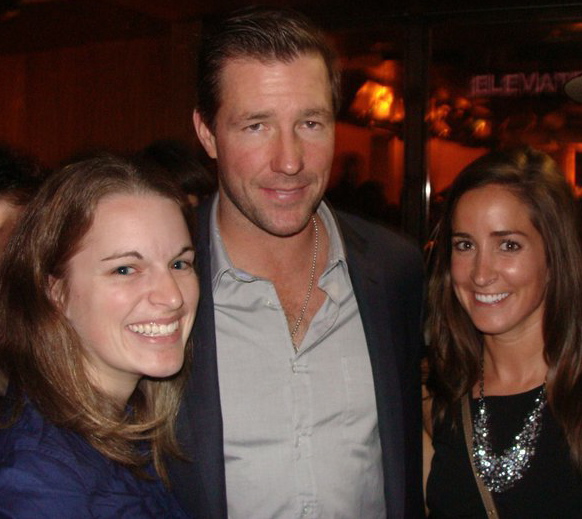 A few things happened before we got this gem.

1) I put in some serious hours with the Film Fest, both this year and last year.
2) I asked and I received. And more importantly, I asked the right people.
3) The Staff was carting EB out of the party (he’s an old 42 after all!), but let Maggie and I be the last ones to receive pics with EB.
4) I struck up conversation with a random girl next to us, who in turn, became our photo angel and emailed me the photos immediately.

Moral: Get out, do things. Befriend someone you normally wouldn’t.

Note: Last night, Maggie and I went to see David Schwimmer‘s film Trust. And I befriended the most giddy girls in the theatre. I mean, thanks to them, I got red carpet photos without looking like a psychopath. And his film was fantastic. It gets distribution next Spring, so be on the look out. I can’t remember the last time I saw a film that just left me utterly speechless.

Up next: Dinner at the Four Seasons for Chicago Cares (the volunteer organization I work on behalf) award ceremony. I think it’s safe to say, Maggie and I would normally not spend a Monday night at this establishment.