This past week, Chicago welcomed the annual Just for Laughs festival. Last year, I was able to attend a couple of smaller shows, but this year, all bets were off.

After Rochelle’s boyfriend was unable to go to the Conan show, I got the invite. We posted up outside at 6:30 a.m. to ensure we scored great seats. It paid off as we received the fourth row! Anna (my mentee and Rochelle’s sister) made shirts for us to wear throughout the work day and it was a struggle to stay focused. At 4, we all headed over to the Chicago theatre for the taping. Despite boasting a guest list I wasn’t too thrilled about, the show was phenomenal (though to be fair, those seats were the main reason). Aziz Ansari popped out of nowhere and did a little something, at which point, I sat shell-shocked in my seat.

A few days later, Amanda and I went to see Nick Offerman‘s show (Ron Swanson for those Parks & Recreation fans out there). He’s married to Megan Mullally (neé Karen from Will & Grace), so I was equally pumped when she made an appearance and performed for a bit. Offerman’s set was so incredibly fantastic. I felt like Leslie Knope receiving advice from my mentor as he went through his 10 tips for prosperity. I firmly believe we should clone him.

After leaving the set, we ran into Retta, who plays Donna on Parks & Rec. In the last season, Donna and Tom (played by Aziz Ansari) do a bit about “Treat Yo Self.” It’s a day (“The Best Day of the Year”) devoted solely to yourself and everything you love. Amanda and I took this idea to heart when we booked a northeastern adventure in August to see Mumford & Sons in Maine and the Lumineers in Central Park. So naturally when we saw Retta, we had to do “The Best Day of the Year” pose. 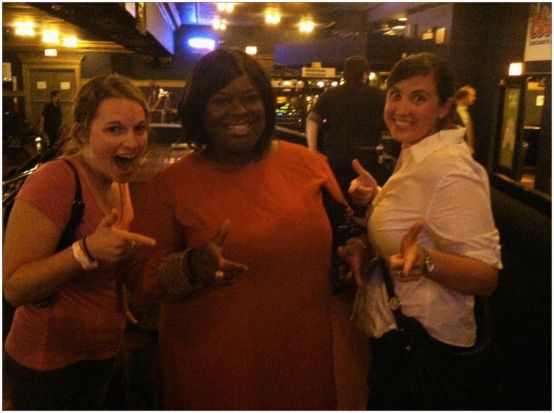 I cannot wait to see what’s in store for next year’s Just for Laughs Fest!